This strategy aims to enter the trade when the coin is experiencing an upwards trend with momentum behind it.

This strategy utilises common indicators like RSI and moving averages in order to enter and exit trades. The Relative Strength Index (RSI) is a momentum indicator that has a value between 0 and 100, where a value greater than 70 is considered overbought and a value less than 30 is oversold. If the RSI value is above or below these values, then it can signal a possible trend reversal.

The second indicator used in this strategy is the Simple Moving Average (SMA). A SMA is an arithmetic moving average calculated by adding recent prices and then dividing that figure by the number of time periods in the calculation average. For example, one could add the closing price of a coin for a number of time periods and then divide this total by that same number of periods. Short-term averages respond quickly to changes in the price of the underlying coin, while long-term averages are slower to react. 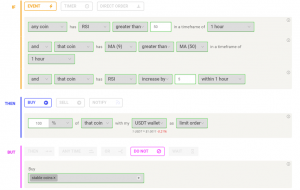 As shown above, there are three conditions that must be met in order for the strategy to enter a trade. The first checks if the RSI is greater than 50, which means that the coin is approaching the ‘overbought’ region on the RSI scale. This is the first indication that the coin has entered an uptrend.

The second condition assesses whether the SMA9 is greater than the SMA50, further showing that the coin is entering on a short-term uptrend.

Finally, the last condition of the rule determines if the RSI of the coin has increased by 5. Any coin with an RSI greater than 50 can be considered bullish. So, an increase by 5 when the RSI is greater than 50 demonstrates that the coin has strong momentum behind it and it is approaching the ‘overbought region’.

These three conditions being met signifies that the coin is in an uptrend with strong momentum behind it.

Lastly, there is a condition to not buy stable coins to have better trades executed, since stable coins are not suited for this strategy.

The strategy exits its position when only 2 conditions have been met.

As shown above, there is a trailing stop loss and take profit of 5% in order to manage risks of the trade.

Get in touch with us via the Live Chat or Contact Us Page!